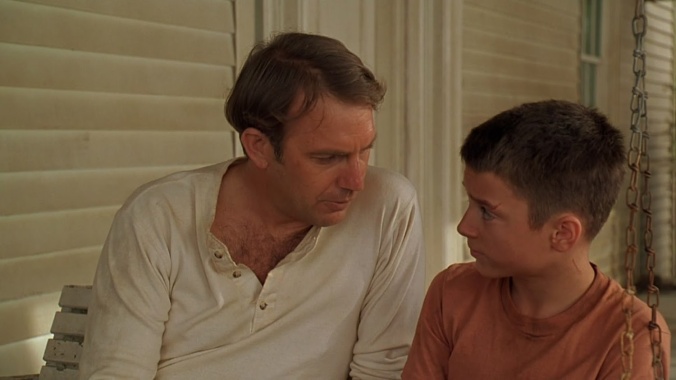 “I saw an angel…He looked just like you, only bigger.”
– from the “The War”

I recently saw the film, “The War” starring Kevin Costner and Elijah Wood. The movie is about Stephen Simmons (Costner) a Vietnam veteran, father of two, a 12-year-old daughter and a younger son Stu (Wood), and the husband of a hard working woman who took on two jobs during his service in the war just so the family could be “dirt poor” like everybody else. She believed in him and would do anything to support him. After all, he was “a part” of her. Stephen was having nightmares prompted by a traumatic experience in the war. His friend had gotten wounded and he was doing everything he could to save him. When they reached the helicopter they told him that there was room for one more. He had to choose. Either him or his friend. After going through great pains to get them to let them both on (going as far as putting a gun to a guy’s head), he left his already wounded friend. He gave up on him when he believed inside that his friend could make it. This caused much guilt and struggle for him in the years to come. He had received a purple heart and a gold star for his service in the war, but he knew that none of that mattered. He had let his friend die.

After the war he started going to a mental hospital for help. After that he was constantly struggling to find a good paying job and keep it. One thing that his father used to say that always stuck with him was that nothing you do in this lifetime will ever make a difference. This seemed to be true in his life. But he was not going to let this be true in his children’s lives. He knew that if they believed they could do anything they could. And if they made a difference in the world he would have made a difference too. The war changed his life. His life now seemed to be governed by two principles: if you ain’t got love you ain’t got nothin’ and no man has greater love than a man that gives his life for a friend. His son was beginning to understand.

One of Stu’s enemies, little Billy, had climbed a water tower to try to grab a key that had been left on the roof. Stu saw him and went after him. The roof was old and shaky. Billy fell through into the water which was swirling violently as it drained. Stu jumped in after him, risking his own life. After much struggle, he managed to grab Billy and lay him down on a platform inside the tower. By then the boy’s brothers and sister was there. Billy was motionless, not even breathing. But Wood would not give up. He slapped him around, and pumped his stomach and encouraged him, “You can do it! Breathe!” The boy’s older brother said to just forget it. He was dead. But Wood did not give up and, with his sister’s help, Billy started breathing again. As he came to he said to Stu, “I saw an angel…He looked just like you, only bigger.”

What an awesome statement! The boy, nearing death, saw an angel who looked like his rescuer but bigger. Stu showed love by risking his life not for a friend but for an enemy. And Billy recognized that this heroic act was a reflection of a heavenly love. Through Stu’s selfless acts he saw a love that is bigger.

What do you think? Cancel reply